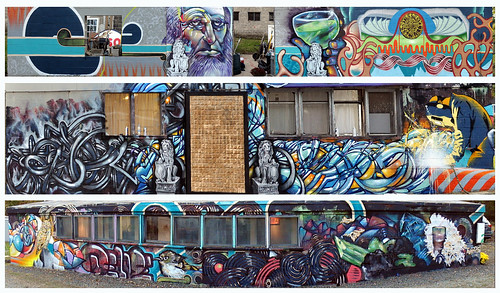 On the weekend of Oct 8th and 9th, 2011, SAGE collective was invited back to the Highland Design Farm to produce another massive mural project as part of the Hopewell Tour Des Arts. Last year, our combined efforts resulted in the HIGHLAND SENTINEL, which was the first mural of its kind in the Hopewell, NJ area.

This year we had to spread out and work in sections. Unlike the HIGHLAND SENTINEL, where we all worked in close proximity, this project had us in different locations to start, so we had to jump around a bit. We also had more square footage to cover with this project, but at least this year, unlike last year, majority of the work was done on the ground and not on ladders, so that in itself was a blessing.

LUV1 kicked things off with a murky background primed into the first section of wall. He then rendered a few crystals and gems busting out of the far right corner. The gems then spilled into his trademark Celtic knots with earth tone loops and swirls. KASSO came in and added a few mid tone geometric shapes that balanced out the composition which then flowed into DELVE’s hollow straight letter spelling out his name. From there, LANK stenciled in an owl which help carry the far left corner, along with KASSOs abstract colorful shapes that morphed into robotic bird. Between the bird and the owl lay an image of an fetus, which represented the patron, Sean Mannex, in saying that the Design Farm is his “baby”. It was also a nod to Leonardo da Vinci; being that one of his famous images is one of a dissected fetus from his sketch journals.

Turning the corner, LANK painted an image of a welder forging a massive abstract image of twisted colorful shapes painted by KASSO, which flowed into LUV1’s energetic black, white and grey composition that framed a pre-standing wooden structure of the Chinese alphabet layered in gold. This was then book ended by LANK’s stencil images of two lions….which gave the impression that they where guarding a secret gate or passageway of some sort.

DELVE began his section with his usual abstract minimalist approach. Working with a muted color palette, his shapes start in a circular graphic manner, then stretching out into KASSO’s portrait of Leonardo da Vinci. KASSO chose the reference of da Vinci from a drawing the renaissance master did of himself at the twilight of his years. Like DELVE, KASSO decided to run with a limited palette, but incorporated a few pop colors to break things up. LANK dropped his lion statue stencil next to the portrait and also nuts and bolts stencils around DELVE’s graphic shapes. The nuts and bolts are elements from last years mural, which tied in both murals with a similar theme.

LUV ONE flowed off the portrait and was inspired to paint a hand with a glass of Absinthe…implying that da Vinci is drinking the controversial cocktail. Along the other side of the structure, AJA worked her contribution; an abstract mesh of subdued colors in a swirl of galactic splendor. LANK capped off the section with a stencil of a compass anagram which spelled out all of our names.

After two exhausting but fun days of work, the hardest part was finding a title for the mural. With the underlying theme centered around da Vinci, we decided to go along with title “Highland Sfumato”. “Sfumato” being a renaissance term meaning, in part, “areas blending into one another”. Our goal with this project, as with all of our projects, was to keep everything well integrated. No one person can claim an entire wall. Each member of SAGE has a piece of every wall…from a small corner to a huge section. It was truly a collaborative effort.

Special thanks goes out to the Highland Design Farm for having us out yet again and for the unprecedented hospitality. Also a big thanks to “Liquitex Artist Materials” for the donation of FREESTYLE brushes used during the production of this project. 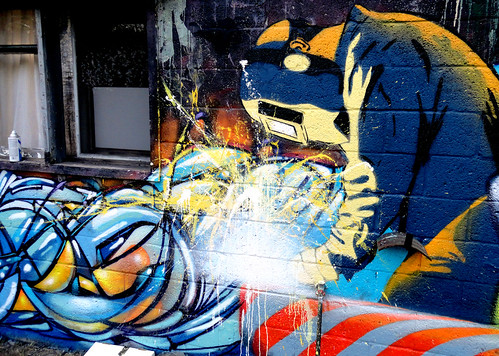 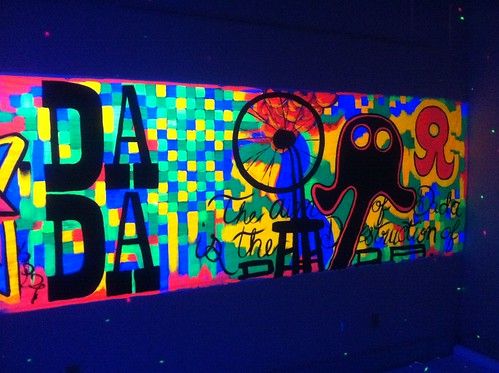 S.A.G.E. Collective was in the house at The Center for Contemporary Art’s Anti Gala on 9/24/2011 doing live mural painting and bodypainting with Leon Rainbow and hula hooping by Andrea Gianchiglia.  Check out the fun video below shot by Jolene and edited by me.  Was a total blast being there, thanks to Ellen and everyone from the CCA http://ccabedminster.org/ for having us out!

to see more flicks from the event go to my flickr

TUNE IN THIS SUNDAY, Sept. 25th to catch Snow’s segment on
MTV2’s Sucker Free Countdown. On at both 11am and 11pm! 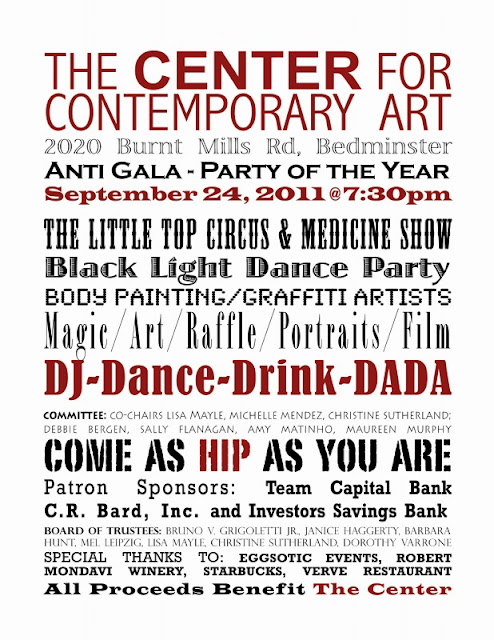 S.A.G.E. Collective w/ Leon Rainbow will be rockin’ the walls and bodies in the blacklight dance party!  Circus acts too?! This should be interesting…more info visit the CCA

S.A.G.E. will be participating once again on behalf of and at the Highland Design Farm in the Hopewell Tour Des Arts Oct. 8th and 9th.  You might remember the massive mural we did last year “Highland Sentinel” , this year we will be building on that theme as we paint some of the other buildings around the farm.  FREE EVENT! ARTists and their studios! LIVE MURALS! GOOD PEOPLE! GOOD TIMES! You should totally come check it out! 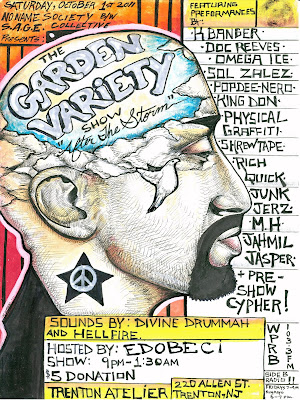 Sounds by: Divine Drummah and Hellfire

adam and eve stitch, a photo by eL hue V on Flickr.
Kasso and myself had a great time painting at the lovely home of Andrea Yitkin.  We painted an old barn surounded by Andrea’s sculptures, statues, flowers, newly refurbished by her husband Tom.  Right next to a goat, rooster and some chicken we were a long way from the usual urban elements.  The theme of the wall was a Garden of Eden scene, it all came together seamlessly.  Here’s a video featuring the many sights of the weekend. 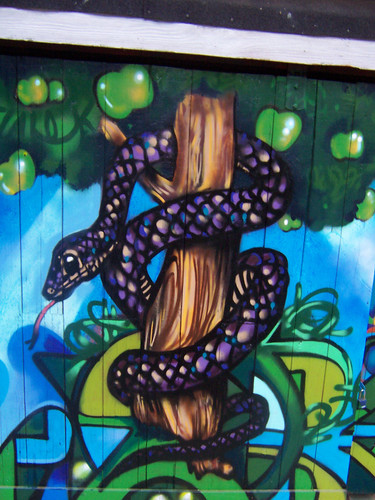 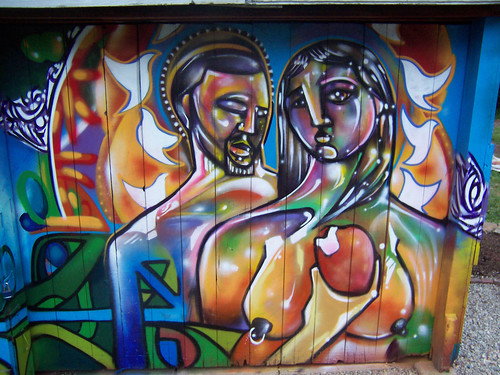 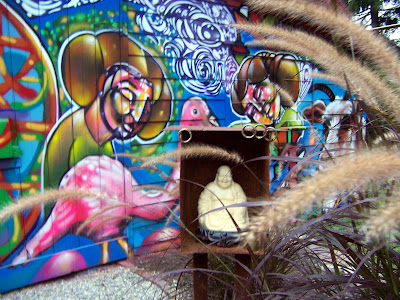 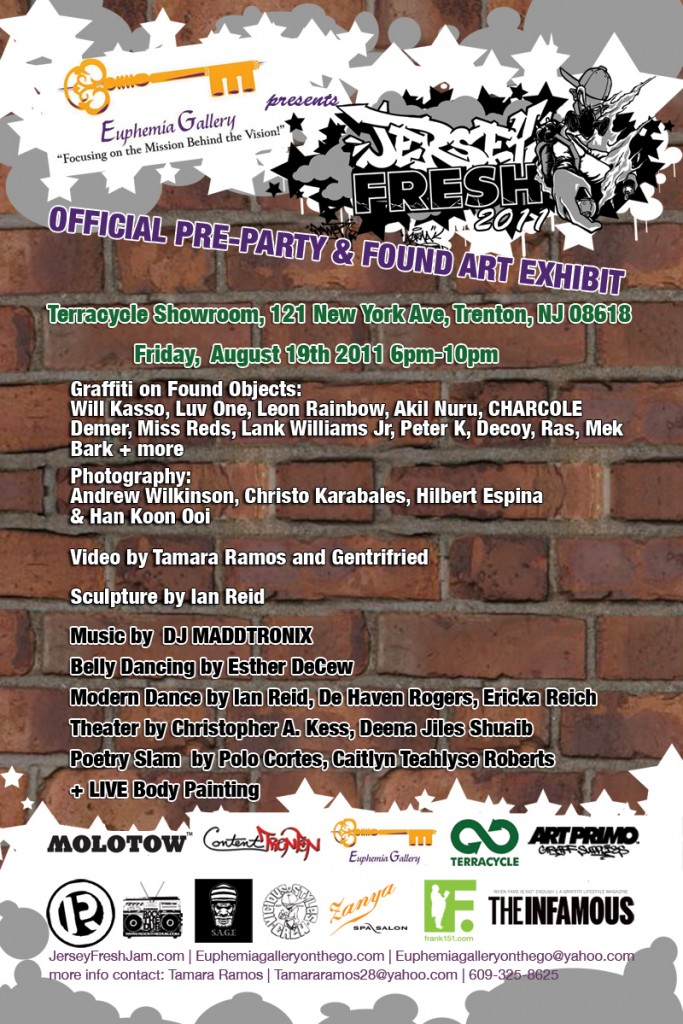 Shout out to RAS and LANK blessing the TerraCycle wih a Peter Falk memorial. Filmed by LUV1 and EWIN. The little guy did good, used a good amount of his footage…future SAGE documentarian! Scratch that, current and official!