Someone gave me the Kaws book during the holidays and I just recently had a chance to look it over. I’ve always been a fan of his work since the mid-nineties. That was a long time ago, so it’s crazy to see how Kaws went from being a local NJ writer to this world famous artist. I still really like what he does today, but it’s for totally different reasons than what I originally liked about his work.

When it comes to graffiti, first and foremost, the most important thing in my opinion is style. I’m constantly sketching and trying to evolve my letters. It’s actually why I don’t even keep a traditional blackbook any more. I’m more concerned with just what the letterforms look like, that I don’t bother to color it in. I just move on to the next sketch. I like to see how my letters change over the years, and I even love seeing how artists who I admire change their work over time. The evolution becomes this long, involved study of style which I really enjoy.

That being said, as I looked through the Kaws book, I found myself wondering what his letter styles would have looked like today if he was still a graffiti artist. I remember painting on some of the same train line walls when I was coming up and just being in awe of how clean his pieces were. The style was usually pretty simple, but had a ton of flow to it. On top of that, they were some of the cleanest pieces I had ever seen. He and Nace were both very clean…every corner was cut, every blend was smooth. I was always impressed studying their pieces up close.

Even in today’s scene, while clean corners don’t always mean as much as they used to, I find myself looking at my walls and trying to find what else can be cleaned up. It’s not that I even think things HAVE to be that way anymore. Some of today’s dopest writers don’t cut one corner and it’s still as amazing. Like I said, it’s more about letterform than technique for me.

In any case, if you like his work and want to see more, or even if you just want to support someone who started off as another guy on the local Jersey scene, get the book. Good stuff…

P.S.
While we’re on the topic of style evolution, I thought I would include this pic from none other than Jersey legend, Nace. This had to be from the early nineties. If you know anything about his work, you know this is WAY different than most of what he is known for. This piece had a ton of corners and they were all clean. Check it…RIP.

Maxx Moses doing what he does best 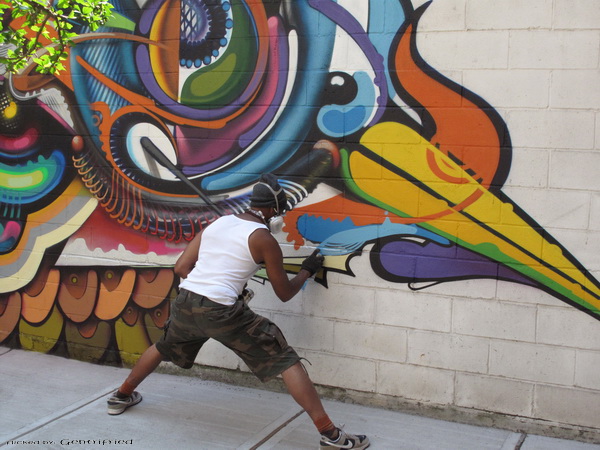 This flick sums up the philosophy of Demer

Its all about the letters