We were asked by Dr. Pruitt to add another mural to Rider University’s Center for Diversity & Inclusion. This mural “Together As One” was completed in April 2021. The project is a collaboration between artists: Leon Rainbow, David Gillespie & Marlon Davila.
We did some prior work for Alex Salguero on the front and inside of the building for his family and business (Classico Auto Glass). After the last commercial project, he asked me to do a mural on the side of the building. When I asked him what he wanted he said something anti-violence promoting peace. […]
“A Journey Forward … A Covid Remembrance” by Leon RainbowThis new street mural in the Esperanza Neighborhood in New Brunswick was created to reflect on the lives and time lost through the first year of the pandemic. Images were developed through community convening discussions around mourning rites, locally and in Central America. The street mural […]
“The Good Life” Perring Plaza, Baltimore, MD 250ft x 25ft. A celebration of Life within Baltimore and the surrounding area. Our intention is to use imagery that invokes happy memories, hanging out with friends, skating, swinging, or sticking your first wheelie on a bicycle. Infusing local iconography as well as color, shapes, and forms that […]
Leon Rainbow originally painted the ceiling at John Beech (3rd St) Park in Trenton in 2012. It ran unscathed for about Five years. Eventually, a few tags and scrawls popped up. I touched it up a couple of times. I was contacted by the City of Trenton, Department of Parks and Recreation to repaint the […]
We got the call from Dr. Connor to do a special mural project with the graduating 8th-grade class. We were excited, to say the least. We worked with the art teachers and students to come up with a concept. We wanted to show the different things that they teach at the school and wanted to […]
This was such a fun project! This is a temporary installation to take a garage on a rundown building and make it something interesting to take pictures in front of. We started with the Welcome To Trenton and built the cityscape off of that. I was able to use an existing structure and turn it […]

Trenton Parking Authority commissioned Leon Rainbow to create a ground mural to beautify the sidewalk on Front and Broad St. The mural also ties in to the existing mural project Murals on Front. The Mural Depicts Iconic Trenton Scenes : The Battle Monument, The State House Dome, The Trenton Makes Bridge, and Washington Crossing The … END_OF_DOCUMENT_TOKEN_TO_BE_REPLACED 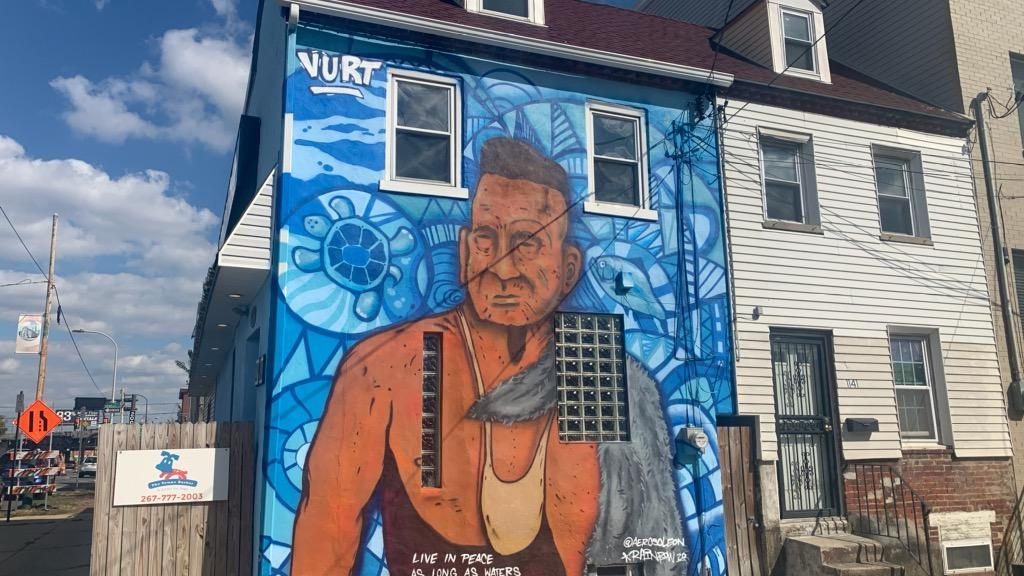 I am excited and grateful to finish the #Tamanend mural . I know sometimes it may seem that these projects are coming together so quickly and effortlessly. In reality art and murals are hard work. I have been working with Erica from #VURT and building owner Don since June. We overcame several hurdles . This … END_OF_DOCUMENT_TOKEN_TO_BE_REPLACED The post Tammany MurAl first appeared on LeonRainbow.com.