This wall was produced in early February, 2009. S. A. G. E. was still in its infancy as a crew...pretty much just consisting of myself and LUV1. LUV contacted me that morning asking if I was willing to come out and paint. It was an unusual day for the middle of the winter. We had a freak 70 degree day! We decided to jam out at Terracycle and do something small and non ambitious.

What started out as something with the intentions on being light heart quickly grew into a full blown mini-mural jam session. LUV had some references from newspapers and one in particular stuck out to me. It was an image of a young woman holding her son during "Hurricane Katrina". 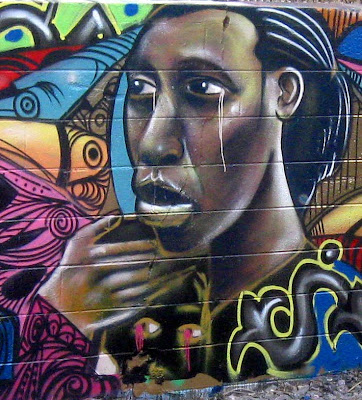 I choose to do a representation of it while LUV painted an image of Hip Hop icon "Lauren Hill". 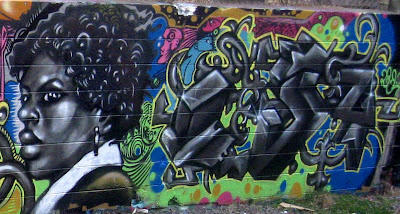 As usual, we jammed out the background with our abstract works...which at the time we were still developing. We also had very lil paint to work with due to it being the off season. This wall was literally done with scraps of paint.

Half way threw LUV had to leave to pick up his kid from school, so I decided to stay to finish up the wall. While I was finishing up, the rap song "Smile" by Tupac and Scarface kept playing in my head. Ever since I saw that pic from the hurricane, I couldn't get it out of my mind. So i went back to the beginning of the wall and put a quote up from that record....part of Tupac's verse which reads "Born with less but your still precious". I figured it summed up the feeling of what the image(the mother and child) conveys. 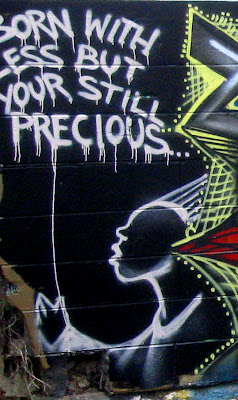 After the quote went up, it started to rain, so i broke out and went home. It was good times none the less.

For those who havent heard the song SMILE...check out the video below.