Meaning of Route 287 graffiti in Bridgewater known only to creator

BRIDGEWATER– Question: What’s taller than every player in the NBA, longer than three semi-trucks and sounds like a “World of Warcraft” slogan?

Answer: A mysterious piece of graffiti along Route 287 northbound in Bridgewater.

It reads “Create, Destroy, Conquer,” in blue, white and black uppercase letters on a sound barrier alongside the interstate highway. The work is more than 50-feet wide and 8-feet tall, and lies approximately one mile before Route 78.

State Police said that the piece was sprayed about six weeks ago, and they have no idea who the did it.

“We patrol the area all the time,” said Trooper Paul Palschakov of the Somerville Barracks. “It’s hard to catch anyone because it mostly happens at night. Their kind of like roaches — when we turn the light on, they scatter.”

He added that oftentimes the artists travel state-to-state, so it is difficult to track someone down. However, on graffiti forum, Bombing Science, there is a mention of the “create destroy conquer boys” on their New Jersey page.

Palschakov said while there are individual graffiti tags all over the state — on walls, garages, and train cars — he has never seen one as big as the “Create, Conquer, Destroy” piece. He surmised that it took at least a week to complete it.

At the bottom of the mural, there is a small tag that reads “Clean-up crew.”

Palschakov said he was not aware of “Create, Destroy, Conquer” tag anywhere else in New Jersey, and that he has received no complaints about it.

Palschakov said detectives advised the Department of Transportation a few weeks ago about the work.

The DOT said it was aware of the graffiti alongside I-287, but has not been able to address the issue due to limited maintenance resources.

“We do seek to address the instances wherever possible,” said a spokesman for the DOT, who did not give a date as to when the graffiti would be removed.

Patrick Scaglione, Bridgewater’s council president said there have been problems with graffiti on the sound barriers in the same area, but nothing as large as this.

“Someone spent a lot of time and creativity,” Scaglione said. “But I think there would be better ways to channel their energy”.

Scaglione said that he does not want to promote graffiti, and wants the piece removed.
“They have some sort of message to convey, but I’m not exactly sure what it is,” he added. 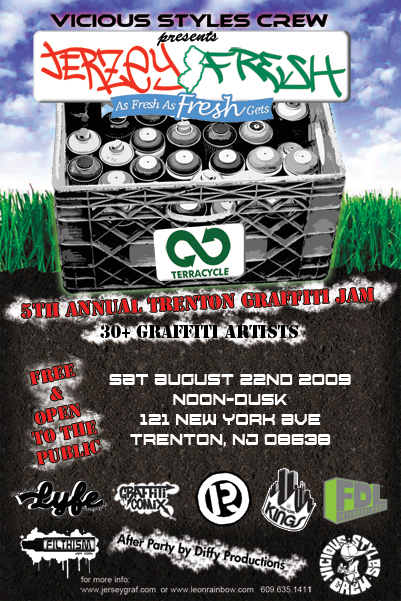